Due to the ever-growing popularity of SMDs, hot air rework stations (also hot air reflow stations) have become a staple tool for electronics professionals and hobbyists alike. Hot air generally outperforms desoldering devices in speed, versatility, and often even precision. This makes them the ideal choice for reworking PCBs. As well as removing or attaching SMD components, such as SOICs, ICs, QFPs, PLCCs, and BGAs, hot air rework stations can be used for production applications including heat shrinking, preheating, and lacquer removal.

What is a Hot Air Rework Station?

A hot air rework station, as its name suggests, is a device that provides a controllable flow of hot air. They are predominantly used for reworking circuit boards but may be used for other applications involving hot air such as shrinking heat shrink. The fundamental features of hot air rework stations are the nozzle output of the hand-held air gun and both temperature and airflow controls. Basic models often have a temperature range between 100℃ and 450℃. with limited precision in temperature accuracy, airflow rate and consistency, and reliability.

More advanced features may include capability for interchangeable nozzles and programmable temperature control. The real benefit of high-quality models lies in precision airflow output and reliability. In a later section, we will discuss the importance of precision for circuit board rework projects.

Note: Click here for a good guide on how to use a hot air rework station.

Most people looking to invest in a hot air rework station are already familiar with desoldering stations and their limitations. Removing SMD chips using desoldering stations can be a slow and laborious process, but more importantly, it risks damage to the circuit board. One slip or shake can result in unwanted contact between the desoldering iron and delicate internal components and wiring. Voltage leak damage is a common issue in resoldered circuit boards.

Desoldering stations do however have some advantages over hot air rework stations. They are a popular option for DIP type packages as, unlike SMDs, the solder is found at the back of the circuit board. This means there is no risk of damaging other components and the solder can be easily wiped away. Desoldering stations also have the advantages of being more portable, easier to clean, and typically cheaper than hot air rework stations of equivalent quality.

If you choose to opt for a desoldering station for SMDs, we recommend a model that comes with a vacuum pump. Not only do vacuum pumps make jobs faster, but they also reduce the risk of inadvertently damaging components by preventing the spread of hot solder.

Removing surface mounted ICs with a small pin pitch is especially tricky for desoldering stations and often results in damage to components. This problem is eliminated with hot air rework stations as the action of hot air is non-contact.

Reworking circuit boards is a precision process that requires precision tools. Although reworking with hot air rework stations is less fiddly than with desoldering stations, the need for accurate tools is still important. As previously mentioned, airflow and temperature control are much less consistent and precise with lower quality rework stations.

Unstable airflow can be problematic, for example, when the entire circuit board is molten and you are trying to remove just one component. You will require consistent low airflow in this case to ensure you don’t blow away other loose components. More generally, too much heat and airflow will delaminate, tear off solder pads, and ruin circuit boards.

Increasing the airflow increases the felt heat. Lower-quality rework stations don’t account for this, meaning that you must manually guess a lower temperature every time you adjust the airflow. This leads to mistakes in even the most seasoned technicians, slowing down work and increasing reject rate.

What’s more, low-quality rework stations are highly susceptible to meltdowns. Beyond the obvious frustration of wasted time and money, this presents a real safety issue due to the high temperatures used.

Features to Look Out For in a Hot Air Rework Station

Our Picks for the Top 5 Hot Air Rework Stations – Reviewed

Here we’ll take a look at 5 hot air rework stations of varying price points and specifications. Although it was previously discussed that quality is essential in hot air rework stations, one cheaper model will first be considered for hobbyists with a lower budget. We’ll then look at 2 mid-range models that include desoldering stations for a great compact circuit board reworking station. Finally, we’ll look at 2 professional models from the highly reputed brands Weller and Hakko. 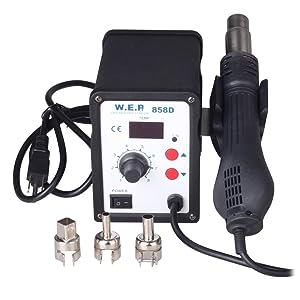 The Kohree 858D has historically been a highly popular and cheap option that is suitable for hobbyists. It has adjustable temperature controls ranging from 100 ℃ to 450 ℃, max air capacity of 120L/min, and noise levels below 45 dBA. Some users comment that the airflow is quite strong. Therefore, it is best to usually keep airflow on either setting 1 or 2 to avoid blowing components off the board.

This rework station comes with 3 interchangeable nozzles, allowing the user to change the quality and diffuseness of the airflow. This is a great feature for the product’s price range.

A zero-crossing triggering temperature control circuit is also included, which means that conduction is delayed until the next zero crossing of the AC mains current. This results in faster, more accurate, and more stable heating control and is extremely common in hot air rework stations.

A potential issue with this product, as with many cheap stations, is that they are liable to burn-out quickly. The majority of criticism regarding this product relates to experiences of dangerous meltdowns within the first few months of use. We therefore do not wholly recommend this product, but include it in this list due to its historic popularity. That said, if you are willing to take on the risk, it may be suitable for occasional users and hobbyists. 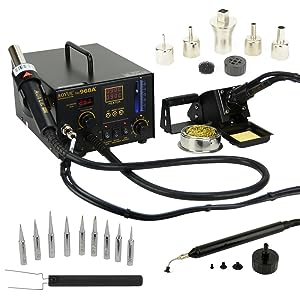 The Aoyue 968A+ is a 4 in 1 rework station including hot air gun, 70-watt soldering iron, vacuum pump, and smoke absorber. The hot air gun has a temperature range of 100℃ to 480℃ with air capacity of 23l/min. It also comes to 5 interchangeable nozzle options, allowing you to meet any rework job with precision. The soldering iron has a temperature range between 200℃ and 480℃ and uses a ceramic element.

The station itself has a digital display where digital calibration features (adjusting temperature and flow-rate of air) are navigated and error reports are shown. It also includes an auto cool-off blower as a safety feature that can quickly reduce the device’s temperature.

Many people looking to invest in a hot air rework station already own a soldering iron, however, having all your reworking tools in one station is great for keeping a clean workspace and helps with storage. Having a spare soldering iron is also preferable in the inevitable case that your old iron breaks. Additionally, this soldering iron comes with 9 tip types, allowing you to expand your toolset.

Aoyue is a well-respect brand and their products certainly deserve your consideration if you are looking to buy a soldering station or multi-tool rework station. 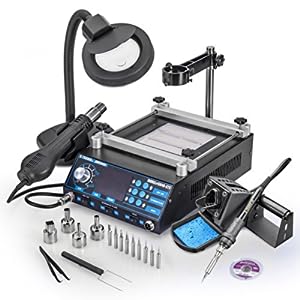 Compared with the Aoyue model, the X-Tronic Model 5040-XR3 comes with many of the bells and whistles that make precision work a joy, however, it does lack a vacuum pump and smoke absorber. The gun comes with 4 interchangeable nozzles and the soldering iron with 10 tips. It also includes anti-static tweezers an IC popper and a roll of gootwick, giving you a complete toolset for reworking.

A workspace for positioning boards is present on the top of the device, accompanied by a clamp and 5x magnifying lamp. Having an available workspace on-top of your rework station means that this device is well suited for individuals with a small amount of available desk space.

The digital display and controls are a strong selling point of this model. Users can calibrate temperature using Celsius or Fahrenheit and input is made easy with the large display and range of well-placed buttons. With separate buttons controlling the power to each device, ensuring that devices that are not in use are switched off is made easy. 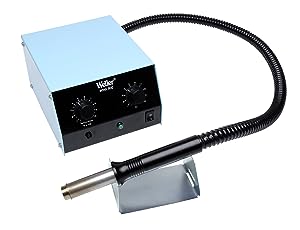 Weller is a long time supplier of professional quality, American made electrical engineering tools. Weller tools are industry level and should be strongly considered by electrical technicians. So what sets this model apart from the rework stations we’ve just discussed? The design looks ordinary and it doesn’t come with any added gizmos, but its power comes in its precision.

The Weller WHA900’s hot air gun has a temperature range of 38°C to 538°C. Unlike the models previously discussed temperature is adjustable with infinite precision between these values. Additionally, the ability to have temperatures descend as low as 38°C is a feature you simply will not find in lower-grade rework stations. There is an internal pump that can provide between 5 L/min and 50 L/min of airflow. Again this is adjustable with infinite precision.

An important feature that greatly contributes to this model’s precision is the temperature sensor at the tip of the gun. This allows the device to automatically correct the output temperature when the airflow is adjusted so the heat felt by the board remains constant. This feature will increase your work speed and greatly reduce your reject rate. 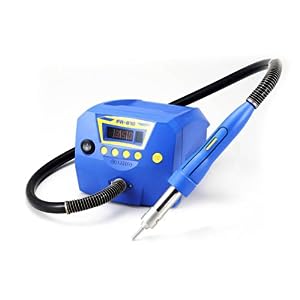 Hakko is another professional grade rework station brand that is frequently recommended by electrical technicians. Similar to the Weller model, the Hakko FR-810 offers high precision. It has an advantage over the Weller model in that it offers a maximum temperature of 600°C and a maximum airflow rate of 100L/min. Such a high airflow rate may allow for nozzles to be used with diffuse airflow over a large area, meaning whole boards can be molten in moments.

Unlike the Weller model, the Hakko FR-810 is digital, meaning that it has a handy display and allows for programmable presets. Many people prefer a digital display for precision work so you can quickly see the exact temperature and airflow. With the programmable settings, you can link presets together so they run in sequence. For example, you could mimic an SMD’s 5 heating zone reflow profile.

Hopefully by now you have a good idea of the options available and what features you should be looking out for in a rework station. Some readers may be disappointed that a greater number of cheap options weren’t discussed. This was done intentionally as the cheaper models are extremely similar in features and quality, so there is little to distinguish between them. The Kohree rework station was chosen as an example of a cheap model due to its overwhelming popularity and its relatively good performance. If you have any further questions regarding choosing the best hot air rework station for you, feel free to leave a comment below.