Ever since the early 1900s, the trombone has been a popular fixture in all sorts of jazz ensembles. From Dixieland to swing, bebop, and beyond, the trombone, along with the trumpet and saxophone, have been essential wind instruments for almost every style of jazz.

The trombone is as frequently seen in a jazz club or blues band as it is on a concert hall stage. However, there are lots of differences between the instruments played in 10-piece jazz combos and 100-piece orchestras.

If you’re in the market for a great jazz trombone, we’ll help you find the ideal instrument, no matter your budget or skill level.

There are lots of different styles of trombone, and while jazz players usually tend towards similar equipment, there isn’t a single type of instrument that is a jazz trombone.

In broad strokes, there are four main types of trombones that you’ll see played:

Alto trombone: Smaller than a standard tenor trombone, these instruments generally play higher parts in Baroque and Classical period orchestral music. However, they’re not typically used in jazz, so we won’t discuss them any further.

Tenor trombone without an F attachment: The standard trombone used by most of the most famous jazz trombone soloists. There are some different options for this instrument, but this what most people are referring to when they say “jazz trombone.”

Tenor trombone (F attachment): This is a very popular instrument for orchestral players thanks to its large bore and substantial sound output. It is generally only used by players of lower parts in most jazz groups.

Bass trombone: A very large bore trombone with an extra-big bell and mouthpiece. It usually has either one or (more commonly) two valve slides. Having two slides allows it to play notes located at the extreme low end of the trombone’s range. Bass trombones are relatively common in orchestras and concert bands, but not so common in jazz groups. That said, the instrument is gaining popularity in some big bands.

In big bands, and in smaller combos that feature trombones, there will usually be at least one solo or lead player. Lead trombones, like lead trumpets, generally play the highest parts and often play long solo sections over the rest of the group.

Trombonists that play these high and exposed parts look for relatively light and well-balanced trombones with a small bore. The smaller bore and lighter weight of these jazz trombones make playing higher parts (like solos) much more comfortable.

Although the specifics can vary from maker to maker, these instruments have a smaller bore size (usually around .480 inches), a smaller bell (6.5-7 inches) and no F-attachment. These attributes make the instrument very light and well-balanced, flexible, and able to project over a big band wind section when needed.

While these instruments are a bit larger than the lead trombones mentioned above, they are still a bit smaller in bore and bell size than most common orchestral instruments. These are often played by lower members of the big band trombone section, which are required to have a full and robust sound on lower parts.

These instruments usually have a slightly larger bore than the lead trombones (.500-.510 inches) and a bell between 7-8 inches in diameter. These instruments may or may not have an F extension – usually depending on player preference and if the part requires it.

Although we won’t really be discussing this style of trombone here, this section may be a useful reference for anyone wondering how the smaller jazz trombones compare to bigger symphonic models.

The traditional bore size for a symphonic tenor trombone is .547 inches, and for a bass trombone, .562 inches. These larger symphonic tenor trombones almost always have an F-attachment and an 8.5-inch bell, while bass trombones usually feature two attachments (F and D) and a bell of around 10 inches. Classical trombonists also use mouthpieces with a bigger bore, and a bass trombonist’s mouthpiece is positively huge compared to the smaller mouthpieces used by jazz players.

Our Picks for the Top 6 Jazz Trombones – Reviewed

None of these instruments will make you great at jazz if you don’t practice! No matter how small your horn (or shallow your mouthpiece) high notes will only happen when you are in good shape and using plenty of air.

Without further ado, here are our top 6 jazz trombone recommendations. 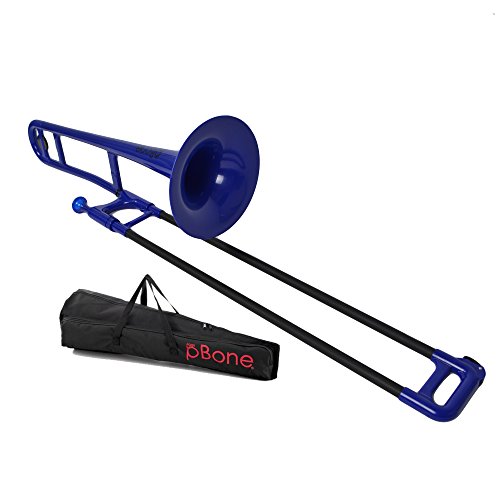 One of the most surprising recommendations on this list may be both the typically least expensive and the most fun. Ever since it was introduced in the 2010s, the pBone has been a great way to introduce younger kids to the trombone, but it also makes a pretty excellent jazz horn.

The pBone is made mostly of ABS plastic which makes it light and durable. It features a medium bore (.500) and an 8-inch bell which makes a great section horn—although a soloist could use it in a pinch. The pBone is available in 9 bright and vibrant colors—making it easy to stand out! We’ve listed the blue model in the link above, but you can also find red, white, green, yellow, orange, purple, and black. All pBones use a small-shank mouthpiece, come with a water key and slide lock, and are pitched in Bb. Obviously, pBones are not available with an F-attachment.

In addition to being a quality instrument, the ABS construction means the horn is quite light (under 2 pounds) and quite difficult to damage. Even if it does get damaged, this instrument is one of the best value options on this list, coming in considerably cheaper than a metal instrument of comparable quality. 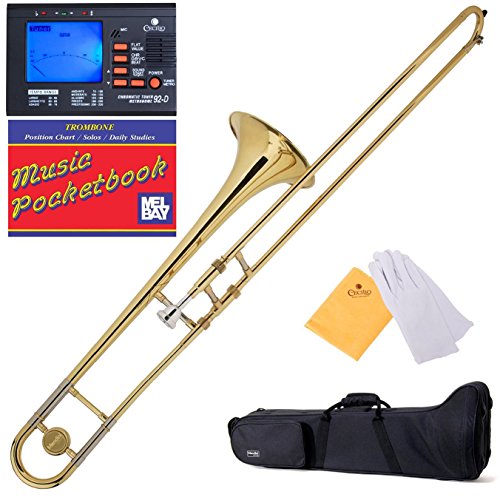 If you’re shopping for a jazz horn on a tight budget, but you can’t bear the thought of a plastic horn, the Mendini by Cecilio Bb Tenor trombone is probably your best bet.

It is a .500 medium bore trombone with an 8-inch bell and a gold-colored lacquer. This horn also does not have an F-attachment.

It is a Chinese-made instrument, and while they are a good value for the price, keep in mind that the price is quite low for a brass instrument. While you do get some nice extras (a chromatic tuner, trombone reference book, white gloves), the instrument itself is passable. If you’re shopping for a beginner or non-musician who is curious about the trombone, this instrument will be a perfectly fine horn. However, if you’re an experienced classical musician looking into getting a smaller horn for jazz you’re probably better off getting the pBone (which actually is an excellent instrument) or saving up a few hundred more dollars to get something with a bit more consistency. 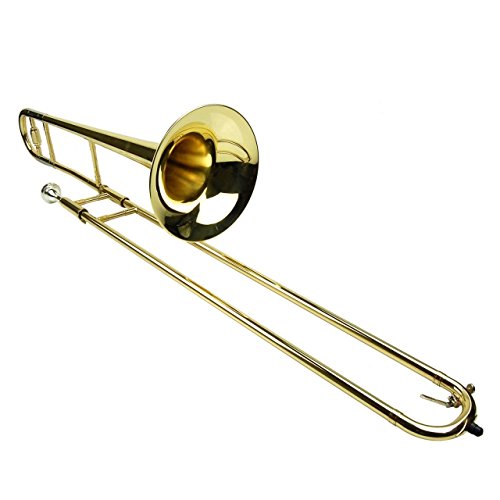 Selmer is a brand with a history dating back over 100 years and has long been one of the top woodwind instrument makers. They recently merged with several other musical instrument makers (Steinway, King, Bach, and many others) and are making high-quality instruments for both beginners and professionals alike.

The TB711 is a medium bore horn (.509) with an 8-inch bell and a detachable balance weight that makes a great section horn, or a lead horn for a relatively strong player. This instrument is technically a “student” model horn, but it is a great jazz horn for any beginner or intermediate player. The new price is very reasonable for such a versatile horn. 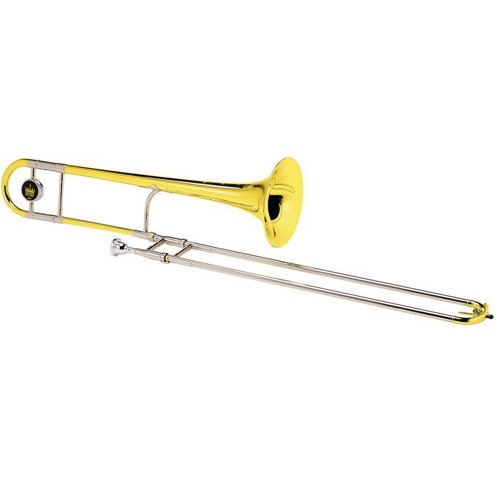 The King 2102 2B—more commonly known as just a King 2B—is a legendary trombone model for jazz. The 2B has been a popular jazz trombone model since it entered production at the beginning of the 20th century and has been made famous by countless trombonists.

This horn features a small bore (dual bore from .481 to .491) along with a small 7-3/8″ bell for great upper register balance and projection. The 2B features various finish options, such as a silver plate finish (with or without gold trim) or a bronze bell.

Another popular option for people looking for the small jazz horn is the King 2BL, which features a slightly larger .491 bore with the same yellow brass 7-3/8″ bell. This makes the horn feel a bit different than the standard dual bore 2B—whether you prefer the 2B or 2BL comes down mostly to player preference. 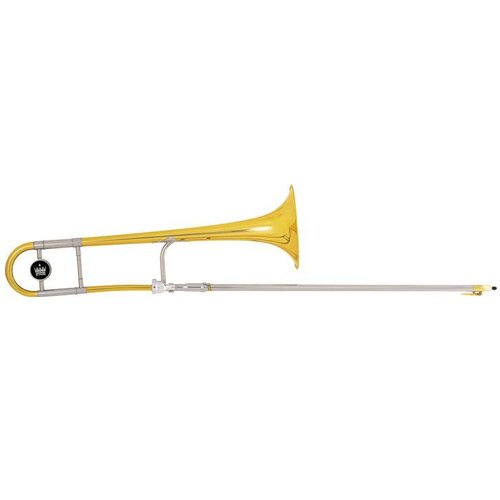 If the 2B feels a bit too stuffy or tight, or you need something with a bit more heft or weight to the sound, the King 3B is another legendary option with a history dating back to the early 20th century.

The 3B has a slightly larger bore than the 2B (.508) and a somewhat larger 8-inch bell. This design gives the 3B a bit more weight and breadth to the sound, making it an excellent section horn or a solo instrument for smaller, more intimate jazz gigs.

While King has been making some of the most classic jazz trombones for close to 100 years, Yamaha is (relatively) new to the brass instrument business. However, the impeccable quality and consistency of Yamaha’s brass instruments have made them a popular choice for everyone from beginners to seasoned professionals.

While a lot of Yamaha’s instruments are good options for jazz, if you’re looking for a top-of-the-line new jazz horn, you definitely need to consider out the Yamaha YSL-891Z. This horn is part of Yamaha’s top Custom Z line and was designed in collaboration with two world-class jazz trombonists: Andy Martin and Wycliffe Gordon.

The 891Z features several critical features for a jazz horn: a small bore (.484″-.490″ dual bore), a 7.5-inch bell, and a yellow brass bell and body. In addition to these features, the 891Z also features two different leadpipes to customize the precise response and feel of the horn. You get a longer NY-style leadpipe developed with Wycliffe Gordon and a shorter LA-style pipe that was designed in conjunction with Andy Martin. This allows you to change how the horn responds to your blow and is a great feature to fit in on any part of any size group—from a small combo to a full big band.

Don’t waste your time trying to fit your big orchestral horn in a small jazz combo—get the right tool (at the right price) for the job! No matter your budget, a great jazz trombone is probably within your financial reach.