Choosing a mouthpiece for tenor saxophone (or really any instrument) can be a daunting task.

With hundreds of options and lots of variables (tip opening, chamber shape, baffle, etc.), it can be incredibly challenging to know how to narrow down your choices!

And that’s not including price! Is it worth it to spend $200+ on a single mouthpiece, or can you get something just as good for half that price?

Well, we’re here to help! Read on to find out what the different parts of a mouthpiece are, and how they all work. This will help you choose the right mouthpiece for your instrument, playing style, and music.

If you’re looking for some quick recommendations, we have that covered. Our top tenor saxophone mouthpiece shortlist can be found at the end of this article.

Why The Mouthpiece Matters

The mouthpiece is probably one of the most critical parts to making a good sound on the tenor saxophone (or any saxophone, really).

Of course, you need a good instrument and a good reed, but the mouthpiece functions as the middleman between the two: a great sax and a great reed will not reach their full potential with a mouthpiece that doesn’t fit the player and the instrument.

Additionally, although an expensive horn or mouthpiece might make a player feel better, finding the most appropriate mouthpiece for a specific player/instrument combination is the best way to improve your equipment and overall playing. It’s not just about spending more money or getting a particular brand!

Remember that every individual saxophone, reed, and player is slightly different. Which means that while you may want to sound like Coltrane, Lester Young, Kirk Whalum, or whoever, just copying their equipment often won’t give you their sound.

So to help you find the perfect tenor sax mouthpiece, we’ll first cover the fundamental parts of the mouthpiece and how those affect the sound.

The Mouthpiece Facing Curve and Table

The table is equally important. While the facing curve must be precisely measured (often to the thousandth of an inch or smaller!), the table needs to be smooth and perfectly level. If it isn’t, this can create unnecessary and unintended reed movement, which will cause similar problems to an imprecise facing.

The mouthpiece material is also a consideration here – not for sound or response, but for stability. If the mouthpiece is made of thin or flimsy material, it may bend or flex unintentionally, which could cause either the facing or the table to bend or flex out of shape.

There are many different shapes, sizes, and designs of baffles that can encourage different sounds. The specific baffle shape that will best fit you and your instrument is a personal selection.

However, here are some general rules that can help you narrow down your selection:

A straight (or flat) baffle usually creates a darker, warmer, and softer sound. This can make for a pleasant tone but often makes it harder to project for solos or lead lines.

A step baffle, on the other hand, makes for a generally bright sound with excellent projection. Mouthpieces with step baffles can create a powerful, cutting sound that can easily project through other instruments. However, the sound can sometimes be uncomfortably bright for some styles of music.

A rollover baffle is an attempt to get the best of both worlds. This kind of baffle allows for a warmer, straight-baffle like sound when playing at quieter dynamics, but gives a little bit of edge or growl when you push the sound. While these mouthpieces can be extremely flexible, make sure you pick the specific model carefully. If the rollover baffle isn’t precisely made, a dead and lifeless sound will be the result

The Chamber, Floor, and Sidewall

The chamber, floor, and sidewall all work together to create the overall internal volume of the mouthpiece.

Generally speaking, the larger the internal volume, the slower the air moves through the chamber, and the darker the mouthpiece sounds. The opposite is true for a small chamber – faster air makes a brighter sound.

The shape of the chamber, floor, and sidewall are also significant. The sidewalls, for example, can be straight, concave, or convex. The different shapes (along with the shape of the baffle and overall internal volume) can have a big difference in the sound, dynamic range, response, and the altissimo register.

These three attributes have a wide range of variability, and trying to discuss all of these comprehensively is too much for a single article, but if you try a few different mouthpieces with different chamber configurations, you’ll be able to determine relatively quickly what works for you and your instrument.

This measurement is made in tiny increments (usually hundredths or thousandths of an inch), but it is often represented by either a number or letter by the mouthpiece maker. Since each mouthpiece maker uses their own letter or number system, it can be challenging to compare the tip openings from one maker to another, unless you find actual measurements.

In general, a soft reed on a large tip opening will make a brighter sound than a stiffer reed on a small tip opening if everything else (player, instrument, and mouthpiece) stays the same.

This is very much a personal preference that will be heavily influenced by your embouchure, jaw, and tooth structure.

Try out several different makes and models of mouthpieces, and you’ll quickly determine the contours and shape that works best for you.

The material of the mouthpiece is important, but for sound and playability concerns, it should be a distant second to the factors and attributes discussed above.

Most tenor sax mouthpieces are made from one of three materials: plastic, hard rubber, or metal.

Practically an article all on its own!

As a general rule, remember that the hardness of a reed affects not only its sound, but it’s ease of playing. This hardness needs to be matched to the appropriate tip opening and facing curve for both the reed and mouthpiece to play their best.

If you are a beginner or intermediate player, you’re better off starting with softer reeds and only increasing the reed stiffness as your embouchure strength and technique develop.

Going to a reed that is too hard too quickly is a recipe for frustration!

Yamaha makes a wide range of mouthpieces for just about every single woodwind and brass instrument. They are well-regarded for not only offering an excellent quality mouthpiece for the price, but their consistency from mouthpiece-to-mouthpiece is outstanding.

The 4C is part of Yamaha’s Standard Series for tenor saxophone and is a solid step-up mouthpiece for younger intermediate players still using the mouthpiece that came with their instrument. The 4C has a medium tip opening of 1.7mm, and the standard 24mm facing length.

Selmer is one of the most popular brands when it comes to all things saxophone, and for a good reason!

The S80 series of tenor saxophone mouthpieces provide a wide range of options for just about any player to find what they are looking for.

While the S80 C* is on the smaller end of the range, it is one of the most versatile mouthpieces in the series. The smaller tip opening and square chamber provide a nice balance of resistance and edge in the sound, without being too bright and piercing. The low range especially has a lovely dark intensity. 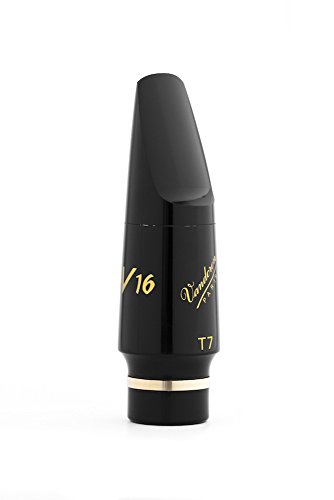 Vandoren is a well-regarded maker of both woodwind mouthpieces and reeds.

The Vandoren V16 series of mouthpieces are specially-designed to capture some of the quintessential jazz sounds from the 20th century. The V16 T7 is available in two different chamber sizes, medium (listed here) and large.

The medium is probably the more versatile size of the two, but if you’re looking for something even bigger and darker, the large chamber may be more appropriate. 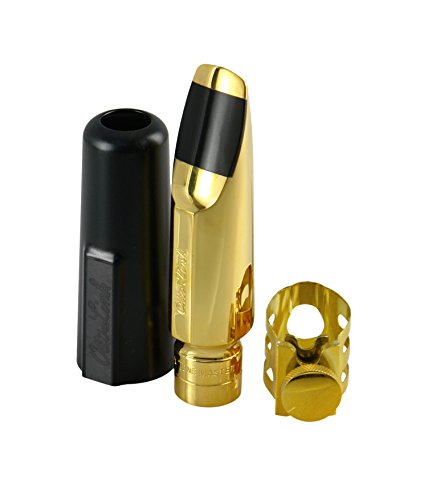 Otto Link has a fantastic reputation as one of the premier makers of metal mouthpieces for saxophones.

He has a wide variety of facing and tip opening options available, although the 5S is an excellent middle-of-the-road if you’re not sure exactly what you need. 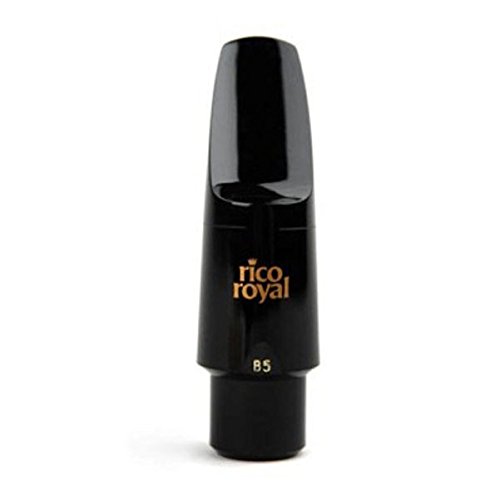 Rico is another brand with a long history of providing excellent reeds and mouthpieces for all sorts of woodwind instruments. You can find their products in almost every band and orchestra room – both in schools and in professional ensembles.

Rico’s Graftonite range is made from a new material called graftonite. This material provides a wide range of tonal colors and is very durable – making this mouthpiece an ideal one for a younger player or marching band.

The Graftonite range for tenor saxophone is available with three different tip openings and chamber configurations. Tip openings range from 2.16 mm to 2.67mm and are represented by the number. We’ve picked the middle tip opening (2.41mm) since it offers a nice balance for most players.

The chamber shapes are indicated by letters – A, B, and C. Again, we’ve picked the middle version as our recommendation since it makes a tremendous all-around mouthpiece. If you want something darker, got with the A chamber. If you’re looking for brilliance, the C chamber will be the most efficient.